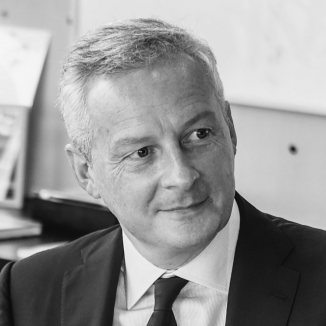 Minister of the Economy and Finance, France,

This June, the Eurogroup convened to discuss the future of the Eurozone, reaching three key agreements.  First, it established a Eurozone budget, funded through the EU, to take force in 2021.  The group also discussed means of strengthening the European Stability Mechanism to not only respond to but also to prevent crises.  The agreements reached were the creation of a common backstop for the single resolution fund as the ultimate safety net in the case of a banking crisis and a reform of the provision of precautionary credit lines.

Bruegel was honored to host Bruno Le Maire, French Minister of the Economy and Finance, to discuss his view of this agreement as a “mini revolution” and the further progress necessary to strengthen the Eurozone.

Minister Le Maire presented ambitious goals for the future of the Eurozone.  Although the history of the Euro demonstrates its overwhelming success, he also noted that the 2008 crisis illustrated weaknesses in the Eurozone architecture that must be addressed.  The Minister stated that the Eurozone should be not just a shared currency but a strong monetary union, with the ultimate goal of making the Euro the strongest currency in the world.

Le Maire began by discussing the Eurozone budget. He emphasized that the creation of a Eurozone budget was revolutionary and that such a notion would have been unimaginable even two years ago.  The Minister was clear that the current proposal is not ideal, but expressed optimism for future improvements.  For example, he emphasized that France would not be satisfied with a tiny budget and hoped to expand the sources of the budget beyond EU funding to include national resources from Eurogroup countries.  He also noted the importance of achieving autonomous decision-making on the part of the Eurozone 19, without the interference of other EU Member States.  Le Maire noted that an Inter-Governmental Agreement would likely be necessary to establish the decision-making procedure.

Next, Minister Le Maire explained the absolute necessity of having more growth within the Eurozone.  He called the lack of growth a failure the reason for the rise of populism in Europe.  The Minister argued that economic prosperity and growth were the way to achieve political stability and defeat populism.  Thus, he proposed a compact for growth for the Euro area in which countries would agree to 1) implement structural reforms and control public finances, 2) increase investment, especially in the domains of innovation and infrastructure, and 3) strengthen the Euro area, including through support of a Eurozone budget.

Turning to integration, Le Maire made three recommendations for deepening Eurozone integration.  First, he advocated the completion of the banking union.  Second, he highlighted the importance of establishing a Eurozone capital market union in order to catch up to China and the United States in the financing of innovation.  Third, he was adamant that the Eurozone budget must adopt a stabilization function as the best way to respond to economic shocks.  The Minister admitted the presence of a vocal opposition to a stabilization function, but stressed that the majority of Eurozone countries and economic experts agree that this must be a long term goal.

In the context of making the Euro the strongest currency in the world, the Minister also discussed strengthening the international role of the Euro.  He said that the Euro is already fairly widely used in global transaction, but must be made a larger reserve currency.  In fact, the Euro only represents 20% of international reserves compared to the U.S. dollar which represents 60%.  Advantages of increasing the Euro’s prevalence would include greater EU sovereignty in foreign policy and less risky exposure to exchange rates in European imports and exports.

In conclusion, Minister Le Maire stated that there is a need for a new impetus to the European construction.  He said that the pace of decision-making must accelerate in order to implement Eurozone integration and make the Eurozone a great success.  Only in this way can Euro-skepticism be defeated and can Europe remain competitive in the 21st century.