By: Bruegel and Konstantinos Efstathiou Date: May 27, 2019 Topic: Macroeconomic policy

On May 28th, two days after European Parliament elections have been held in all 28 member states, heads of state and government will meet in Brussels to start the nomination process for the leadership of many EU institutions.

Most of these posts – i.e. the presidents of the European Council and the European Commission, as well as the high representative of the Union for foreign affairs and security policy – are typically filled every five years when the incumbent European political cycle gives way to the new one. However, with Mario Draghi’s term coincidentally set to expire on October 31st 2019, leaders will also discuss candidates to fill the post of the ECB president for the next eight years. The below infographic of the summarises how the appointment process works.

The upcoming appointment has given rise to a flurry of media stories on who the new ECB president might be. Leaving names aside, this review tries to isolate the arguments about what qualifications the new president should have and what challenges he or she is likely to face.

For starters, some of the opinions focus on what the selection should not be about. For instance, Stefan Gerlach criticises the race to succeed Draghi as having taken on “the flavor (…) of the Eurovision Song Contest”. As he puts it, “governments want a candidate from their country to win because it makes them look good, and not because the candidate would necessarily improve ECB policymaking”, voting across regional block lines is very likely and, “absurdly, some commentators argue that it is their country’s turn to win”.

Similarly, the editorial board of the Financial Times calls for minimising the effect of the trade-offs involved when filling the multiple EU roles in selecting the next ECB president. Although the “EU leaders will seek to strike a balance between nationalities, regions of Europe, political party affiliations and gender”, the authors note that “the ECB presidency is the one job, above all others, that must not fall victim to horse-trading”.

What is special about the ECB presidency? The authors stress that although technically the ECB president is “first among equals” on the ECB Governing Council, the role the president plays in practice has profoundly changed and become more important over time, with the crisis acting as the catalyst. Whereas the first president of the ECB – from 1999 to 2003 – Wim Duisenberg focused on ensuring consensus-building in the ECB Governing Council  on the stance of monetary policy, later presidents had to assume a more prominent role. The authors argue that “Mr. Draghi’s ‘whatever it takes’ speech of July 2012 was an example of leadership at its best and proved to be a turning point in the [euro-zone] crisis”. They go on to describe the ECB as “the EU’s most effective, irreplaceable institution” during that crisis.

Secondly, the next ECB president should possess a solid economics background, Gerlach insists. During “ordinary times”, simple quantitative benchmarks like the Taylor rule may suffice to steer monetary policy, he argues. When economic and financial crisis hits, however, “prevailing economic concepts, such as the inverse relationship between inflation and unemployment posited by the Phillips curve, often break down and textbook solutions no longer apply.  In such cases, when “uncertainty typically skyrockets”, time is of the essence as “central banks need to act quickly and decisively to prevent problems from becoming entrenched by expectations”. The ECB president needs to have “a clear view of what needs to be done and the confidence to take decisive action” and “that, in turn, requires him or her to have a first-hand understanding of the problems that could arise”. To strengthen his case, Gerlach cites the example of former Federal Reserve chairman Ben Bernanke, arguing that his background as an academic economist specialising in “monetary policy mistakes made during the Great Depression” contributed to the timely and effective response of the Fed to the collapse of Lehman Brothers.

Lucas Guttenberg weighs in and argues that the most important requirement for the next ECB president will be his or her willingness and credibility to renew the promise to do ‘whatever it takes’ to save the euro. The latter remains the strongest safety net the euro has, he writes, adding that the alternatives are either undesirable or unpopular. On the one hand, failing to maintain that promise is an “existential issue for potential crisis countries, especially for those who are too big for the ESM [European Stability Mechanism]”, and more generally remains “a question for the stability of the monetary union as a whole”, whereas “far-reaching deepening of the monetary union” has little support in Germany. Therefore, Guttenberg believes that most member states will insist on this criterion rather than less important questions, such as “the question of how hard or soft one is when it comes to questions of “normal” monetary policy – that is highly data-driven at the ECB anyway and a question of majorities… Announcements to the markets, on the other hand, are purely a matter for the boss – that is what counts”, he claims.

If keeping the euro zone together requires maintaining the commitment to ‘whatever it takes’, there may be other challenges for which the next ECB president will still need to find an answer.

For his part, Martin Sandbu does not believe this to be the question of what the monetary toolkit comprises. On the contrary, he views “strong consensus on how the ECB works” as another element of Draghi’s legacy; “the unconventional has become convention” he notes, referring to unconventional monetary policies. Nonetheless, Sandbu wonders whether the euro zone runs a greater the risk from an “uninspired economic trudge leaving many citizens tempted by anti-European politicians, convinced that the eurozone does not work for them”, than it does from a “repeat crisis”. In the answer he is positive, writing that “more is needed than simply avoiding the worst in a crisis”, “the job of upgrading the ECB’s capabilities is far from done” and “the next president’s task is to improve monetary policy’s traction on the real economy”.

Finally, Jacob Kirkegaard (here and here) contemplates a different scenario for the next ECB president come the next downturn. Kirkegaard explains that the ECB’s arsenal will “be limited to buying riskier private assets or lifting the central bank’s self-imposed limit on sovereign debt holdings”. Choosing the first option “in shallow euro area markets would be criticized as ‘picking winners’”, while going for the second “risks being ruled illegal by the European Court of Justice”. Concluding that “these constraints make fiscal policy crucial to combatting the next slump”, Kirkegaard argues that “the next ECB president must not only be willing to use monetary policy to combat downturns but also effectively push member states to be more forceful in using fiscal policy for the same purpose”. 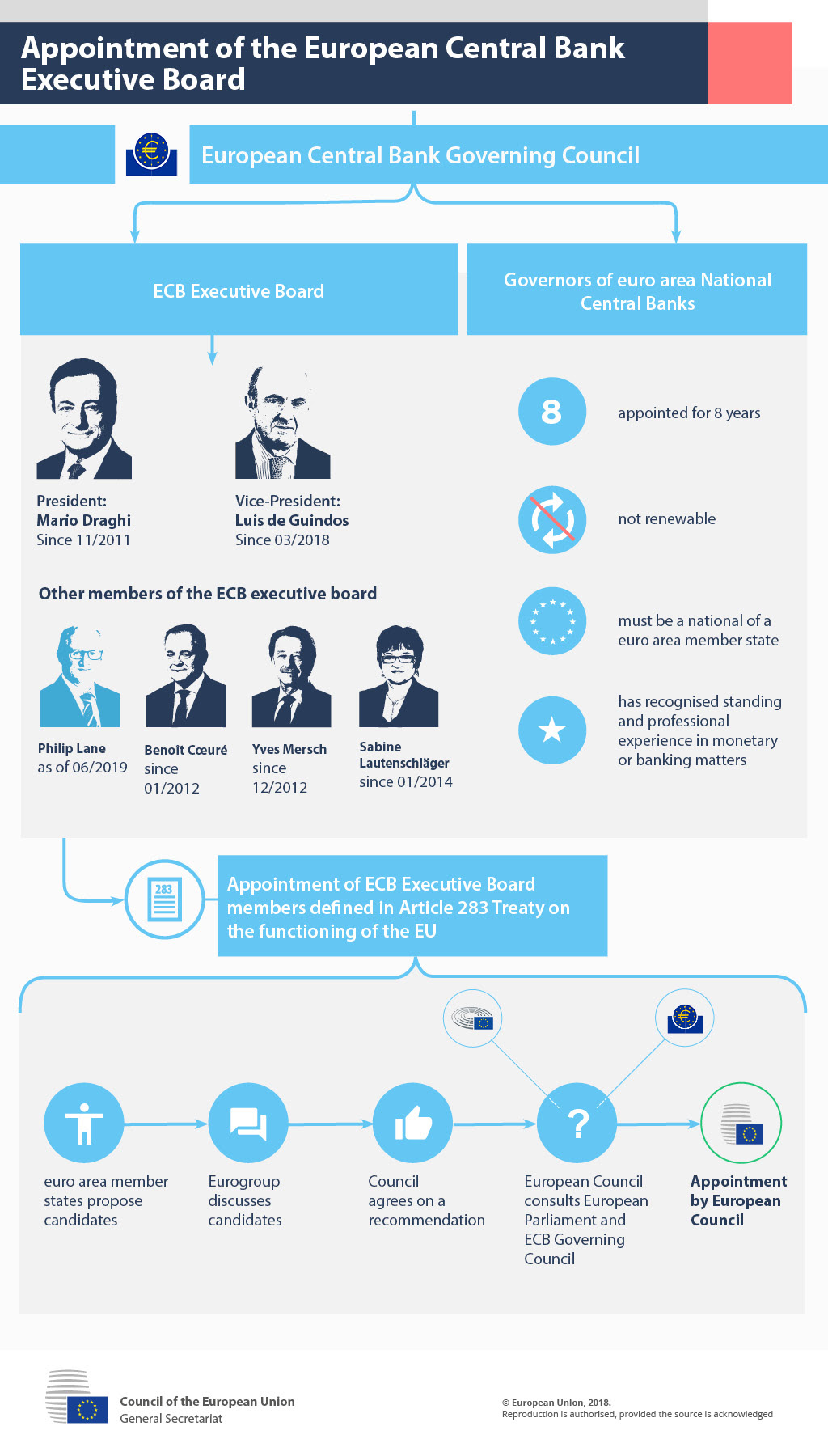 Source: European Council/Council of the EU