The yearly Jackson Hole gathering of central bankers has focused this year on the topic of changing market structure, the rise of superstar firms, and the implications of the way they compete for central banks.

John van Reenen argues that understanding macroeconomic outcomes requires taking into account the large (and increasing) differences between firms, which stem in large part from heterogeneous productivity rooted in managerial and technological capabilities. In recent decades the differences between firms in terms of their relative sales, productivity and wages appear to have increased in the US and many other industrialised countries. Higher sales concentration and apparent increases in aggregate mark-ups have led to the concern that product market power has risen substantially, which is a potential explanation for the falling labour share of GDP, sluggish productivity growth and other indicators of declining business dynamism. Van Reenen suggests that this conclusion is premature, and that many of the patterns are consistent with a more nuanced view where many industries have become “winner take most/all” due to globalisation and new technologies, rather than a generalised weakening of competition due to relaxed antitrust rules or rising regulation.

Alberto Cavallo studies how online competition, with its shrinking margins, algorithmic pricing technologies, and the transparency of the web, can change the pricing behaviour of large retailers in the US and affect aggregate inflation dynamics. In particular, he shows that in the past 10 years online competition has raised both the frequency of price changes and the degree of uniform pricing across locations. For monetary policy and those interested in inflation dynamics, the implication is that retail prices are becoming more sensitive to aggregate “nationwide” shocks, increasing the pass-through of both gas prices and nominal exchange rate fluctuations. 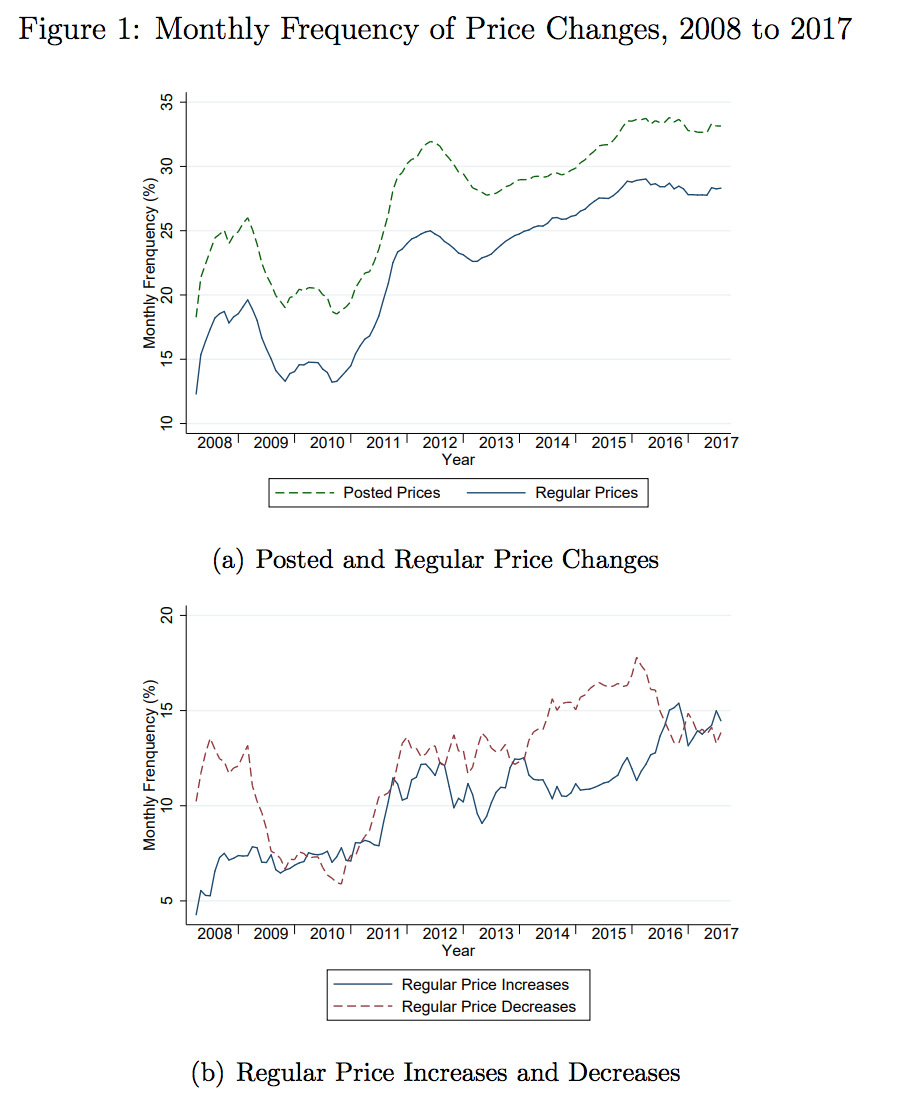 Andrew Haldane et al. explore the effects of market power on monetary policy, using counterfactual policy simulations and adaptations of a New Keynesian model. Taken together, their evidence suggests that an increase in market power and mark-ups could have potentially important consequences for the economy and for policy. Haldane et al. look at the different effects that a secular rise in mark-ups could have on the Phillips curve and the output/inflation policy trade-off. Taken together, the net effect of increased market power could be a potentially significant rise in inflation (but less so output) variability, relative to the counterfactual case of stable and static mark-ups. As for monetary policy, Haldane et al. discuss two ways in which the path of monetary policy could be potentially affected by an increase in market power.

Antoinette Schoar looks at the financial market, argues that the rapid growth of new digital technologies has created a market dynamic, where many institutions outside the central bank system might soon have much more comprehensive, more accurate and also more timely information than the regulators. Companies like Google or Amazon can use their data to predict regional sales growth or job losses. Google Trends is just one example of the power of aggregation from individual search information. This poses a challenge going forward that is structural and intellectual. On the one hand we need to think about how central banks can get visibility of the types of data that private-sector institutions are collecting as part of their core business. On the intellectual side the availability of this hyper-granular data asks for a new way of building economic models based on individual purchase or borrowing decisions. This is a challenge to the whole field of (macro)economics.

Also looking at the financial market, Corbae and Levine find that an intensification of competition increases the efficiency and fragility of banks; that economies can avoid the fragility costs of competition by enhancing bank governance and tightening leverage requirements; and that the monetary transmission mechanism is materially shaped by bank competition, in that bank lending responds more aggressively to central-bank-induced changes in interest rates in more competitive environments. Their research stresses the importance of regulations that improve bank governance, because these boost efficiency and stability but also show how important it would be to explicitly account for the structure of the banking system when assessing regulatory and monetary policy.