Is China’s innovation strategy a threat?

What’s at stake: A number of recent contributions accuse China of acquiring technology from abroad without respecting international rules. This blog reviews the current debate that focuses on China’s supposed push to modernise its industry and the challenges for advanced economies. By leapfrogging to high-tech manufacturing products, the strategy threatens the competitive advantage of the US and the EU. The international rules-based order is put to a test facing large-scale government support to high-value added sectors and anti-competitive behaviour.

Rob Atkinson et al. recently called for a united front led by the United States to establish a doctrine of constructive, alliance-based confrontation in reaction to Chinese innovation-mercantilist policies. The background of the paper is the Chinese government’s innovation strategy of modernising its industry and achieving global dominance in a number of high-tech industries. The authors criticise innovation-mercantilist practices which aim to domestically supply high value-added manufacturing products while maintaining access to global markets for Chinese products and effectively distort a level playing field.

Besides the violation of fundamental free market tenets, the report highlights national security implications emerging from a diminished domestic industrial base, compromising US military supply chains and reducing capability to manufacture military systems. Atkinson et al. recommend a strong stance to contest Chinese practices on the US side while reinvigorating the market- and rules-based global trading system in close collaboration with allies (possibly G19) but led by the US.

The Chinese government’s strategy has most recently been laid out in the “13th Five-Year Plan for Science and Technology” and the “Made in China 2025 Strategy”. In a synonymous report, the German think tank MERICS explores the cornerstones and context of the strategy and criticises its “techno-nationalist” aspects. The aim of “Made in China 2025” is to turn the country into a global leader in manufacturing of high-tech industries such as automotive, aviation, robotics, medical devices and information technology. It is the government that aims to improve the competitiveness of its enterprises on domestic markets and fuel global expansion. Ultimately, this would lead to technological catch-up and import substitution in sectors crucial for long-term growth.

While increased demand for high-tech manufacturing products and growing innovation capacity from China is good for the global economy, the MERICS report stresses that this is conditional on China abiding by the principles of market- and rules-based trade. The authors point out that China’s leadership systematically intervenes in domestic markets to disadvantage foreign competitors and facilitate economic dominance of Chinese enterprises. This puts pressure on countries in which high-tech industries contribute a large share to the industrial output, such as Germany or South Korea.

The authors at MERICS expect that the strategy is likely to succeed in elevating a small number of Chinese manufacturers to international frontrunners, but will fail at promoting a broad-scale technological upgrading across the Chinese economy. The strategy’s effectiveness is reduced by the mismatch between industry needs and political priorities, inefficient allocation of funding, a lack of bottom-up initiative and investment as well as the current economic downward pressure in China which might cause job losses among less skilled workforce.

Both the US Chamber of Commerce and the EU Chamber of Commerce in China have recently voiced concerns in reports on China’s strategic reorientation. Moreover, the European Commission and the High Representative of the Union for Foreign Affairs and Security Policy published a joint communication to the European Parliament and the Council on Elements for a new EU strategy on China which points out a lack of reciprocity and market access and seeks an agreement with China on combatting IP theft.

Among the most reported examples of anti-competitive behaviour are government-subsidised acquisitions of technology firms. These cases seem alarming not least because of their national security dimension according to Atkinson. A Stratfor analysis piece reports that Washington has expressed concern about Chinese involvement in the high-tech sector because the US views China as a potential adversary in the Pacific Basin.
The failed attempt by Fujian Grand Chip Investment to buy German semiconductor company, Aixtron, is a recent case.

As described by the New York Times, Aixtron began looking for a new investor after the retraction of a major order from a Chinese client caused its shares to drop. Through intermediaries, the National IC Fund offered to provide a loan of 500 million EUR for the deal. The US government blocked the sale of the company’s US assets leading to the cancellation of the deal. The US administration stepped in because of an alleged national security risk relating to military application of Aixtron’s technical body of knowledge.

Germany has become the top destination for Chinese investment in high-tech industries in Europe according to G. Chazan at the FT. The article mentions the case of Kuka, one of Germany’s most innovative robotics companies, which was acquired by Chinese appliance-maker, Midea, with the goal of expanding Kuka’s presence in the Chinese market. The value of Chinese FDI in Europe has more recently been discussed in the MERICS publication “Record Flows and Growing Imbalances”: 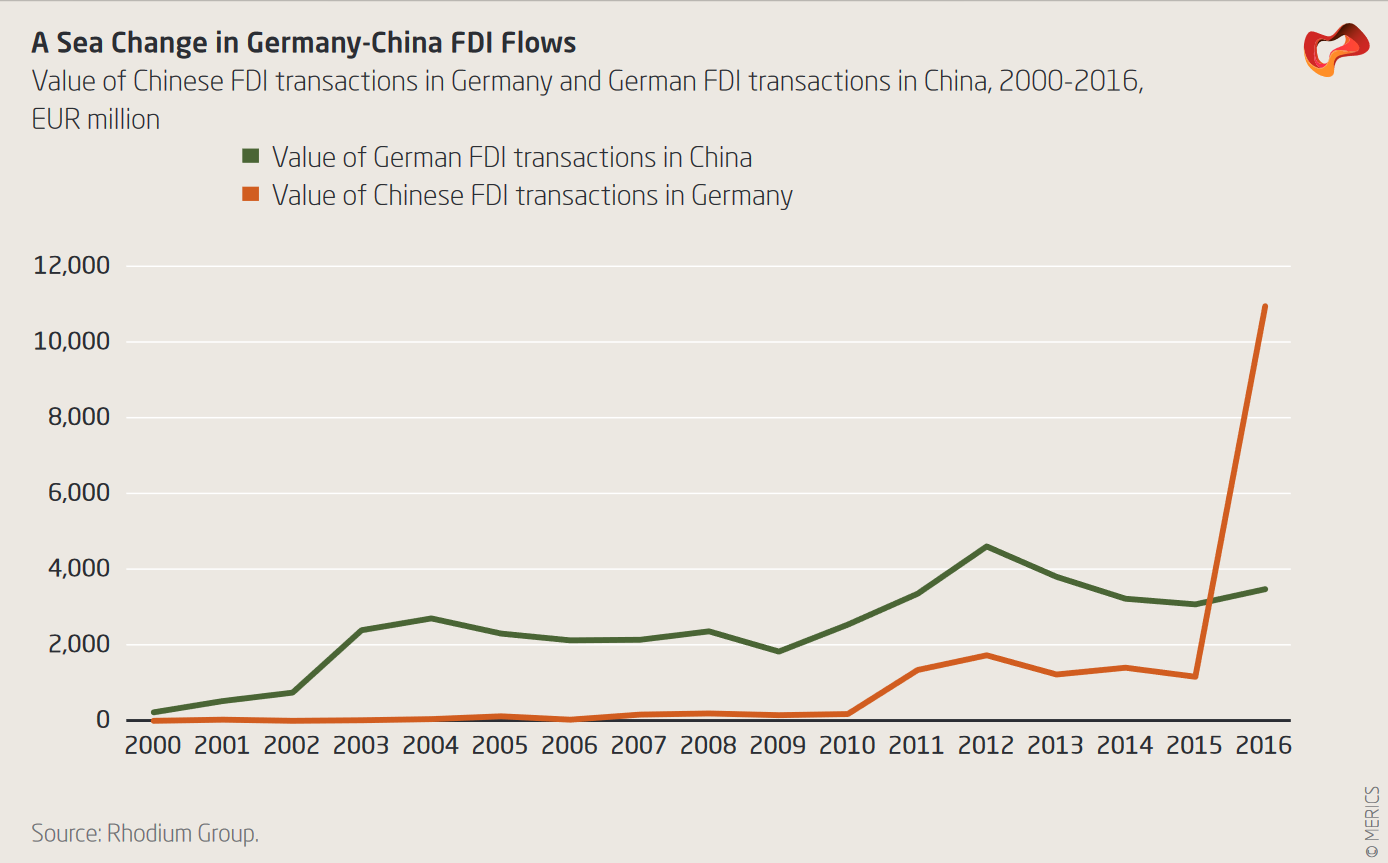 J. Delcker at Politico writes that European officials, business leaders and lobbyists still widely welcome Chinese investment in Europe. This is despite warnings of former German Economy Minister Sigmar Gabriel that Germany was sacrificing “its companies on the altar of free markets”. Similar opinions have been expressed by G. Öttinger, European Commissioner for Budget and Human Resources. European companies will benefit in the early stages of the “Made in China 2025” strategy, but Mauro Petriccione, deputy director general in the European Commission’s trade department is sceptical of future development according to Politico.

T. Moran at the Peterson Institute quotes the German State Secretary at the Ministry for Economic Affairs and Energy in the title of his article, “Can Europe be open but not stupid on foreign acquisitions by China?”. The EU and its member states have no mechanism to screen foreign acquisitions of EU companies unless they involve sensitive military and defense contracts. For this reason it was not possible for Germany to block the Aixtron acquisition without intervention from the US. Moran supports the idea of creating an EU body that corresponds to the Committee on Foreign Investment in the United States (CFIUS). This institution would be tasked with screening foreign acquisitions regardless of sector but with a narrow focus on national security.

The report “Two-Way Street: 25 Years of US-China Direct Investment” by Rhodium Group and the National Committee on US-China Relations puts FDI numbers into perspective and highlights that the US FDI footprint in China is still about four times larger than Chinese FDI presence in the US. Flows from China are at a low level. Yet, FDI from China is increasing fast and targets high-tech industry.

The Information Technology & Innovation Foundation lists further anti-competitive practices in its annual publication on “The Worst Innovation Mercantilist Policies” and Rob Atkinson’s report “Enough is Enough”. Among them are:

In terms of economic implications, Autor et al. estimate the effect of increasing import competition from China on innovative activity in US manufacturing. The authors find that the effect of import exposure on the change in patents produced is strongly negative when accounting for pre-existing trends. Reduced profitability expectations in the affected sectors are a possible explanation they put forward. 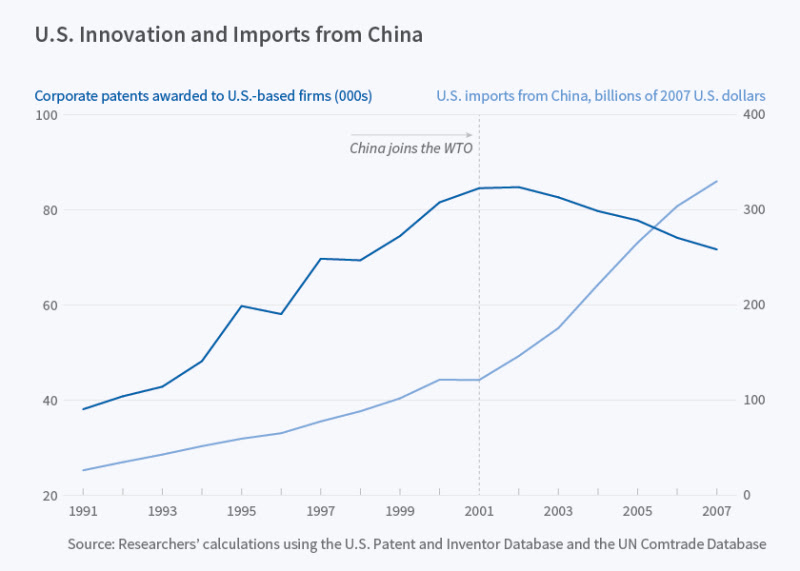 The WTO has followed Alice to Wonderland, assesses Scott Kennedy, looking into the international dispute data since the Chinese accession to the WTO in 2001. Compared to the share in total global trade, the number of cases filed against China is smaller than against the US. China is a special case, however, regarding the focus of disputes – targeting largely abuses in advanced manufacturing – and compliance. Fear of retaliation and an opaque policy system in China challenge the international rules-based order.

In 2012, Noah Smith classified articles on Chinese innovation into three categories, those questioning China’s ability to innovate, those alarming about a wave of Chinese innovation and those calling for rapid innovation in America to stay ahead. However, the real question in his view was how much China will innovate, steal and force foreign companies to transfer technologies in exchange for market access.

Closed door event for a a selection of experts on India and the EU to discuss the state and future of EU-India relations.

Topic: Global economy and trade
Read article More on this topic More by this author