What’s at stake: historian James Truslow Adams, in his 1931 book The Epic of America, stated that the American dream is "that dream of a land in which life should be better and richer and fuller for everyone, with opportunity for each according to ability or achievement”. Few ideas have ever been as powerful as the “American Dream”, and many recent political events hinge on the fear that this “dream” may be dead. Meanwhile, researchers have been trying to measure the reality behind the dream.

One of the defining features of the “American Dream” is the ideal of absolute income mobility, that is the expectation that children can have a higher standard of living than their parents. Despite academic interest and the policy relevance of this question, its operationalisation is made difficult by lack of a large, high-quality panel datasets linking children to their parents in the US. Halikias and Reeves 2016 compare results from a 2016 Urban Institute Working paper with results from an earlier PEW report and show that estimates of absolute income mobility vary quite dramatically even when researchers use the same source data (in this case, the Panel Study of Income Dynamics).

Raj Chetty, David Grusky, Maximilian Hell, Nathaniel Hendren, Robert Manduca and Jimmy Narang have developed an approach (based on tax records) that overcomes the key data limitation that has hampered research on trends in intergenerational mobility, ie the lack of large panel datasets linking parents and children. This paper is part of the bigger Equality of Opportunity Project, and data are available online. Based on this data, the authors find that rates of absolute mobility have fallen from approximately 90% for children born in 1940 to 50% for children born in the 1980s.

The result that absolute mobility has fallen sharply over the past half century is robust to the choice of price deflator, the definition of income, and accounting for taxes and transfers. In counterfactual simulations, they find that increasing GDP growth rates alone cannot restore absolute mobility to the rates experienced by children born in the 1940s. In contrast, changing the distribution of growth across income groups to the more equal distribution experienced by the 1940 birth cohort would reverse more than 70% of the decline in mobility. These results imply that reviving the “American Dream” of high rates of absolute mobility would require economic growth that is spread more broadly across the income distribution. In a separate paper, the same data is used to assess the correlation between a child’s probability of attending college and her parents’ income rank, as well as  transition probabilities, such as a child’s chances of reaching the top quintile of the income distribution if they start from the bottom quintile. Based on all of these measures, it appears that children entering the labour market today have in fact the same chances of moving up in the income distribution (relative to their parents) as children born in the 1970s. However, because inequality has risen, the consequences of the “birth lottery” – the parents to whom a child is born – are larger than in the past.

Branko Milanovic and Roy van der Weide argue that high income inequality today reinforces income differences between the generations and makes social mobility more difficult to achieve. They assess the impact of overall inequality, as well as inequality among the poor and among the rich, on the growth rates along various percentiles of the income distribution. The analysis uses micro-census data from US. states covering the period from 1960 to 2010, and finds evidence that high levels of inequality reduce the income growth of the poor and, if anything, help the growth of the rich. When inequality is deconstructed into bottom and top inequality, the analysis finds that it is mostly top inequality that is holding back growth at the bottom.

Unsurprisingly, geography also matters a great deal. Chetty, Hendren, Kline and Saez show that intergenerational mobility varies substantially across areas within the US. For example, the probability that a child reaches the top quintile of the national income distribution starting from a family in the bottom quintile is 4.4% in Charlotte but 12.9% in San Jose. What makes these areas different? Chetty et al. argue that high mobility areas have (i) less residential segregation, (ii) less income inequality, (iii) better primary schools, (iv) greater social capital, and (v) greater family stability. 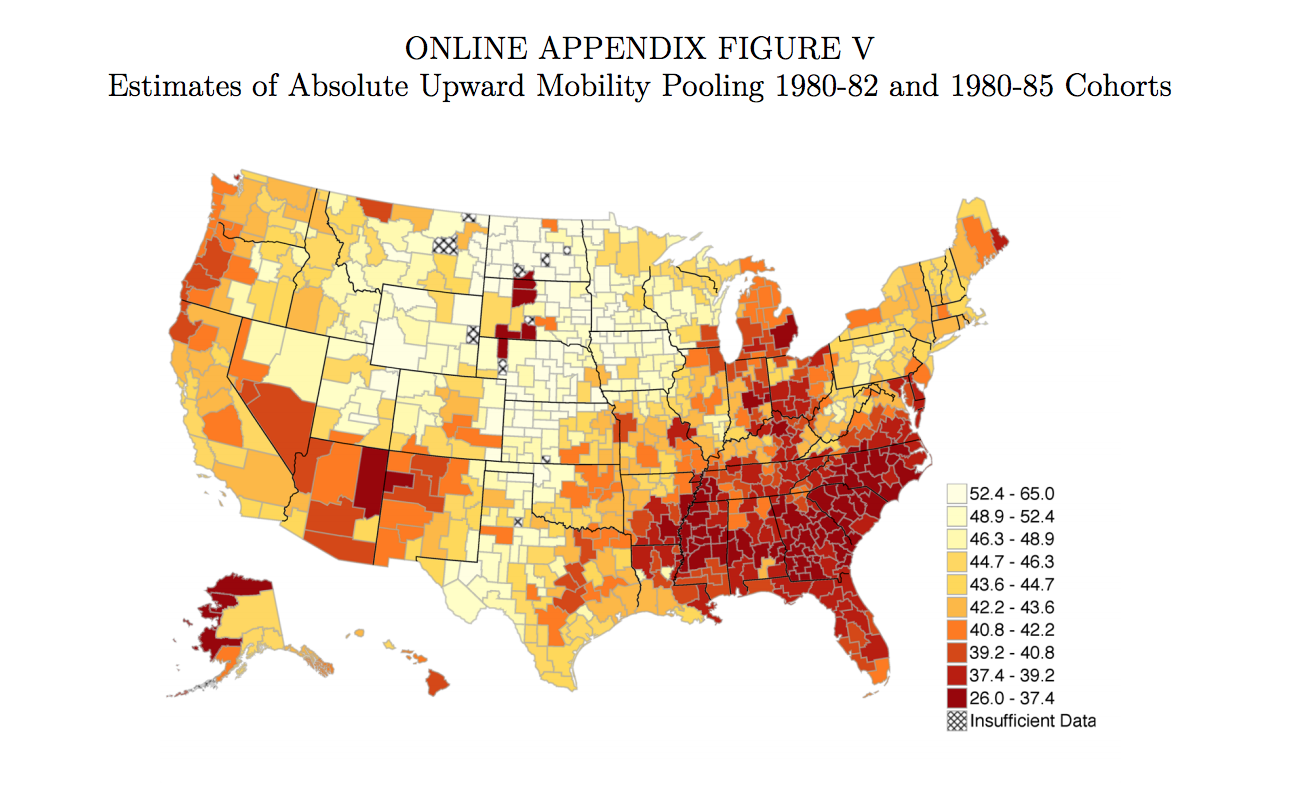 Why don’t people move, then? Larrimore, Mortenson and Splinter, who also investigated income mobility,  explore the determinants of two year changes in individual labour earnings and family incomes, such as job or industry changes, marriage, divorce, and geographic mobility. They find that for both men and women changing jobs, changing industries, and moving to a different state are each associated with higher levels of absolute earnings mobility. Unmarried men who move to a different state experience small increases in earnings, while married men experience a small decrease. Moving to new states, on the other hand, has a negative impact on the earnings trajectory of women regardless of whether they were initially married or not, and the effect is substantial for married women

The impact of geography may be amplified by the fact that – as research over the past several years have shown – US workers are far less likely to move across state lines than they used to be, although the reason for this is still unclear. Molloy, Smith, Trezzi and Wozniak recently documented a clear downward trend – started in the early 1980s – in labour market fluidity, common across a variety of measures of worker and job turnover. This trend is only partly related to population demographics and is not due to the secular shift in industrial composition. Moreover, this decline in labour market fluidity seems unlikely to have been caused by an improvement in worker–firm matching or by mounting regulatory strictness in the labour or housing markets. They argue that plausible explanations might include changes in the worker–firm relationship; changes in firm characteristics, such as firm size and age; and a decline in social trust, which may have increased the cost of job searches or made both parties in the hiring process more risk averse.